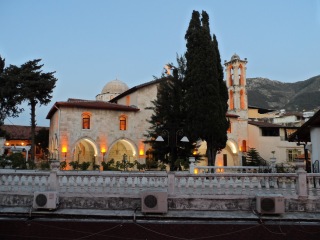 The Orthodox church in Antakya

By now Christendom is well over its Easter celebration. Easter is regarded as the main church festival. However, in many aspects it looks more like a pagan festival.

The name itself seems to indicate this. At a time when the Church was closer to original Christianity, the festival was called Pascha or Passover, derived from the Hebrew פסח. But as time went on more and more pagan practices were introduced, and the name was changed to Easter. The origin of the name itself may have been pagan. Wikipedia has this to say about it:

“In his 725 AD work, De temporum ratione, the Venerable Bede, a Northumbrian monk and Christian scholar, suggested that the modern English term Easter, cognate with modern German Ostern, developed from the Old English word Ēastre or Ēostre. This is generally held to have originally referred to the name of an Anglo-Saxon goddess, Ēostre, a form of the widely attested Indo-European dawn goddess. The evidence for the Anglo-Saxon goddess, however, has not been universally accepted, and some have proposed that Eostre may have meant “the month of opening” or that the name Easter may have arisen from the designation of Easter Week in Latin as in albis.” [1]

In his book The Two Babylons, Alexander Hislop observes:

“Then look at Easter. What means the term Easter itself? It is not a Christian name. It bears its Chaldean origin on its very forehead. Easter is nothing else than Astarte, one of the titles of Beltis, the queen of heaven, whose name, as pronounced by the people of Nineveh, was evidently identical with that now in common use in this country. That name, as found by Layard on the Assyrian monuments, is Ishtar. The worship of Bel and Astarte was very early introduced into Britain, along with the Druids, “the priests of the groves.” Some have imagined that the Druidical worship was first introduced by the Phenicians, who, centuries before the Christian era, traded to the tin-mines of Cornwall. But the unequivocal traces of that worship are found in regions of the British islands where the Phenicians never penetrated, and it has everywhere left indelible marks of the strong hold which it must have had on the early British mind.” [2]

All this may be right or wrong. Whatever the case, Easter has been mixed up with elements that are foreign to any Christian celebration. An example are the Easter eggs. This custom naturally has a myth of origin. It says:

“The coloring of “Easter eggs” originated from the pious legend that Mary Magdala was bringing cooked eggs to share with the other women at the tomb of Christ – This remains the tradition among observant Jews even in our own time – When Mary Magdala saw the Lord, the eggs in her basket turned brilliant red. Thus, the true meaning of dyeing Easter eggs is to show forth the miraculous transformation and re-creation of the whole world by the victorious resurrection of Christ.” [3]

“The classic poets are full of the fable of the mystic egg of the Babylonians ; and thus its tale is told by Hyginus, the Egyptian, the learned keeper of the Palatine library at Rome, in the time of Augustus, who was skilled in all the wisdom of his native country: “An egg of wondrous size is said to have fallen from heaven into the river Euphrates. The fishes rolled it to the bank, where the doves having settled upon it, and hatched it, out came Venus, who afterwards was called the Syrian Goddess “— that is, Astarte. Hence the egg became one of the symbols of Astarte or Easter; and accordingly, in Cyprus, one of the chosen seats of the worship of Venus, or Astarte, the egg of wondrous size was represented on a grand scale.”[4]

Hislop may have a point. A footnote by John Garstang in the book The Syrian Goddess by Lucian of Samosata says: “Atargatis, [Astarte] according to the form of the legend given by the scholiast on Germanicus’ “Aratus” was born of an egg which the sacred fishes found in the Euphrates and pushed ashore.” [5]

Now, all this is very strange. In the Middle East, Antioch (or Antakya) included, there was a tradition of weeping for the god Tammuz. The story goes that the young Tammuz (who, among other things, represented vegetation) died and was bewailed by his consort Ishtar (or Astarte), the goddess of love and sex. Eventually he returned to life again. With the egg as a symbol of life or resurrection – and at the same time connected to Venus or Astarte – it is puzzling to read the story of Mary Magdala at Jesus’ tomb, where she takes upon herself the role of the wailing the death of Jesus with eggs turning red at his resurrection.

Besides all this, it should be remembered that the Nusairy Alewites (a group of Muslims regarded as renegade by the mainstream) in Antakya and western Syria celebrates a “Festival of Eggs” roughly at the same time as the Catholic and Orthodox Churches celebrate Easter. And evidently, this festival has nothing to do with the resurrection of Christ. The Nusairys are not afraid of admitting that they, besides Muslim holidays, also celebrate those of their Christian neighbours, such as “Epiphany, Pentecost, and Palm Sunday.” [6] However, they do not claim that their Festival of Eggs has any connection with anything Christian.

Nevertheless, a similarity exists between the Festival of Eggs and the Melkite story about Mary Magdala. The Nusayri Alewites, like the Hindus, believe in reincarnation in the literal sense of the word. According to a source of mine, a Protestant with an Alewite background, the eggs represent reincarnation. Obviously the Nusayri Alewites and the churches have the tradition of celebrating a festival by using eggs from the same source although the connotations of the eggs are different, but not at all dissimilar.

Is it not strange that Mary Magdala, who by some is believed to be a former prostituted, is waiting at Jesus’ tomb for his resurrection with eggs in her hands? It is as if the egg-born Astarte is waiting for the resurrection of her Tammuz, just in a new disguise.

People are naturally free to mix whatever they like into their popular beliefs. However, the uncontrollable connotations of their new discourse may take them to places they did not anticipate.

Into the Euphrates River an egg of wonderful size is said to have fallen, which the fish rolled to the bank. Doves sat on it, and when it was heated, it hatched out Venus, who was later called the Syrian goddess. Since she excelled the rest in justice and uprightness, by a favour granted by Jove, the fish were put among the number of the stars, and because of this the Syrians do not eat fish or doves, considering them as gods.”

Writer and translatorliving in Antioch on the Orontes (Antakya, Turkey) and Copenhagen.
View all posts by Antiochene →
This entry was posted in Uncategorized. Bookmark the permalink.