The Citadel of Antioch

A view from a point besides the Habib-i Neccar Mosque. The citadel is on top of the mountain to the right.

We do not know when the citadel on the top of Mount Silpius was originally built. Glanville Downey, though, has the following comment: “There is no specific literary or archaeological evidence for such a citadel, but the presence of citadels in the other major Seleucid foundations makes it almost beyond question that there was one in Antioch.”[1]

According to Libanius, Alexander the Great himself had a citadel built at a site called Emathia, but it is not clear where it was situated. At the time of the First Crusade, the citadel was there and the Crusaders tried to get inside, but to no avail. When the Crusaders finally took Antioch, the citadel remained on Muslim hands until they finally surrendered.

When the French traveller and orientalist Jean de la Roque came to Antioch about three hundred years ago, he visited the citadel. He claims that he saw remains of a temple up there.

Another visitor mentions a big pool or cistern between the citadel and the summit of Mount Silpius. This pool can still be seen inside the old city walls.

The ruins can be visited, but the approach is difficult. It is worth the effort, though. For obscure reasons nobody has sought to facilitate the ascent to the place. Consequently visitors are few.

Construction inside the citadel

A view from the citadel 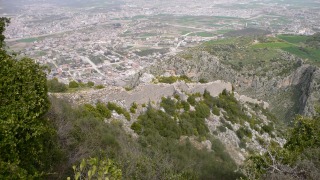 The wall descending towards the Iron Gate

Looking down from the citadel. The torrent of Parmenius is in the centre of the picture. To the right you have Mount Staurin with the Grotto of St Peter. To the left is the area of the Forum of Valens. On top, on the other side of the street the Hilton Museum Hotel is being built. Lots of mosaics were found there.

1 Response to The Citadel of Antioch