The Cherubim Gate and the carob trees

In second century Antioch there was a gate at the southwest extreme of the Colonnaded Street called the Cherubim Gate.[1] Outside this gate was the settlement of Kerateion and after this the settlement of Rhodion on the eastern side of the torrent Phyrminus.

A map of old Antakya. The location of the Cherubim Gate is marked with an x. Ouard is the Arabic name for rose, So we maintain that this quarter is what was called Rhodion. Today it is called Güllü Bahçe (Rose Garden). Kerateion was very like identical with Mahsan.

The story goes that the Roman general Titus after destroying Jerusalem in 70 CE put up representation of cherubs (angelic beings) taken from the temple in Jerusalem at this gate to annoy the Jews living in this neighbourhood. The cherubs are thought to have been similar to those who had been placed on the Ark of the Covenant in the Jewish temple in Jerusalem. However, at the time of the destruction of Jerusalem, this room was empty. Consequently, it is uncertain what the cherubs at the gate were supposed to have been.

We have this story from the Byzantine chronicler Ioannes Malalas who died in 578, about five hundred years after the destruction of Jerusalem. He writes:

“Titus, having celebrated a triumph for his victory, departed for Rome; and Vespasian from the Jewish spoils built in Antioch the Great the so-called Cherubim before the gate of the city. For there he fixed the bronze Cherubim which he found fixed in the Temple of Solomon; and when he destroyed the Temple he took them thence and carried them to Antioch with the Seraphim, celebrating the triumph for the victory over the Jews which had taken place in his reign, setting up above a bronze statue in honour of the Moon with four bulls facing Jerusalem, for he had taken it at night when the moon was shining.” [2]

The trouble with Malalas, though, is that he has a tendency to mix hearsay into his writings. Thus, Jerusalem was not taken by night as claimed in the quotation. This, of course, would not exclude that Titus set up statues of some sort at the gate.

The gate is also mentioned by a biographer of Symeon Stylites the Younger in connection with a plague that hit the city in the sixth century:

“The destroyer went toward the gate at the south, which issues towards Daphne, and there rose from the so-called Cherubim, and as far as Rhodion, in all the quarter called Kerateion, a great cry and mourning and much lamentation.” [4]

According to this, the quarter called Kerateion was situated outside the Cherubim Gate, between the gate and the quarter of Rhodion.

On the other hand, Procopius gives us the following information about the situation of Kerateion(or Cerataeum):

“So, then, after the city had been destroyed, the church was left solitary, thanks to the activity and foresight of the Persians to whom this work was assigned. And there were also left about the so-called Cerataeum many houses, not because of the foresight of any man, but, since they were situated at the extremity of the city, and not connected with any other building, the fire failed entirely to reach them.” [5]

According to these two quotations, Kerateion was situated outside the Cherubim gate with sufficient distance to be unharmed by the fire inside Antioch. It should be mentioned, though, that the wind in Antakya is mostly in the west. If this was the case when the Persians burnt the city, flames and sparks would blow in the opposite direction of Kerateion. The space between the city inside the Cherubim Gate and Kerateion may not have been extremely wide.

However, the quotation from the biography of Symeon Stylites the Younger seems to indicate that the quarter of Cherubim was outside the gate. And Procopius’ story about the fire leaves us with in impression that there was no other quarter between Kerateion and the city. This seems reasonable as the distance between the old site of the Cherubim Gate and the quarter called Rhodion (today Ward [rose] in Arabic and Güllü Bahçe [rose garden] in Turkish) can be walked in less than five minutes. 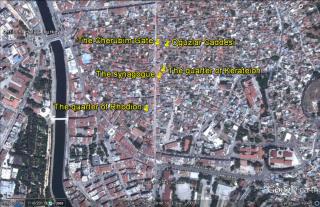 The area south of the Cherubim Gate in modern Antakya. The gate does not exist anymore.

There is another explanation, although it admittedly is based on abduction.

Here in the Middle East mythopoeia is a common phenomenon. Over the Cave Church of St. Peter, for example, you find the rock-hewn bust of Charon, the character that, according to Greek mythology, took the souls of the diseased over the River Styx. Locals will tell you that originally it is the Virgin Mary. To them Charon looks like a woman and he is carved into the rock over the church, so why not? 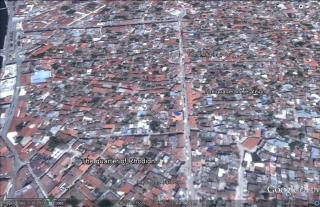 But back to the Cherubim Gate.

As mentioned above the word cherub is a Hebrew word (כרוב: kerûb). The plural of this word is kerûbîm. The Greeks in Antioch would write is as χερουβιμ while the Arameans would either use the Hebrew form above or their own kerûbîn.

Now the word kerûbim pronounced nearly as the word for carob in Hebrew and Aramaic (חרוב, cherub or kherûb).[7]

In the Hebrew translation of Jesus’ parable of the Prodigal Son in the Gospel of Luke chapter 15, the Greek word for carobs in verse 16 has been translated by the word cherûbin plural (חרובים).[8]In the original Greek text the word is κεράτιον (keration). According to a Greek dictionary, κερατωνια (keratwnia) and κερατεα (keratea) are names of the carob tree. Please notice how close these words for carobs are to the name of the quarter of Kerateion between the Cherubim Gate and the quarter of Rhodion.

Consequently I suggest that we dismiss the story of Malalas about cherubs set up by Titus at the south-western gate of Antioch.

Indeed, there may have been statues or similar objects at the gate, and they may even have been placed there by Titus. But as people did not know what they represented – or they knew, but later generations forgot it- the Aramaic and Hebrew name of the quarter between the gate and the quarter of Rhodion, the Quarter of Carobs, was believed to mean the Quarter of Cherubs (Cherubim), and the gate was named accordingly. This process would be similar to the one that has happened to Charonion, by some believed to represent the Virgin Mary.

The Greek speaking populace, however, continued to call the quarter by its original name Kerateion ([the quarter of] carobs) while they started to use the Hebrew name on the gate.

In this connection it should be remembered that the Jewish quarter was situated at the gate, probably outside it, in the quarter of Kerateion (between the Jewish synagogue and the point where streets Oğuzlar Caddesi and Kurtuluş Caddesi today meet). It is therefore natural that it was the Hebrew version (cherûbîm) and not the Aramaic version (cherûbîn) that became common.

(For further information, please see my book Antioch on the Orontes – A History and a Guide (Hamilton 2012))

The fruit of the carob tree is often associated with John the Baptist. In German it is called Johannisbrot, in Danish johannesbrød, in Swedish johannesbröd, in Dutch Johannesbrood, in Finnish johanneksenleipäpuu.

The story goes that the Medieval ascetics did not like the idea that John the Baptist used to grashoppers. He was not supposed to eat meat, they thought. Consequently they insisted that the grashoppers mention in the New Testament account were in fact carobs.[9]

Today this church is the Habib-i Neccar Mosque, and inside the mosque, a few steps from the former quarter of Kerateia, there is a room with a sarcophagus claimed to contain the bones of John the Baptist (called Yahya in Turkish and Arabic).

[1] Cherûbîmis the Hebrew word in plural.

Writer and translatorliving in Antioch on the Orontes (Antakya, Turkey) and Copenhagen.
View all posts by Antiochene →
This entry was posted in Uncategorized and tagged Antioch Kerateion Cherubim Gate Antakya. Bookmark the permalink.